The Chuo Expressway between Tokyo and Kofu

It’s Google Maps. You may already know about this function, but I didn’t, and was pleasantly impressed.

I was using Street View to do some research for some of my edits of Headless, when I backed up one step further than intended. The view zoomed backwards and up into the sky, turning the landscape into this amazing, 3D, impressionistic piece of art. I spent the next couple hours flying around Japan like I was playing some slow moving video game. I was pretty awestruck.

Some areas were better rendered than others. When I got out into the countryside, everything flattened out. But in the cities, it was glorious. It is not fully realistic, and that’s what I love about it. It’s like flying over a 3D Monet. Okay, maybe not that good, but for a rendering of essentially the entire Google-mapped portions of the planet, it’s pretty damn cool.

And I hope that it stays mostly like this. I hope they don’t end up making it too realistic, because I love it as something not quite real, although they could make the bridges and highway signs render better; the shadows turn into what looks like giant ragged curtains hanging off them.

I think of what this will be like in the not-so-distant future. Within ten years, easily, we’ll be able to walk down the street in Tokyo without leaving our homes. We’ll have our VR headsets and haptic suits on, exploring the world. Personally, I can’t wait.

Here are a few more images from my “trip” around Japan, with Mount Fuji in the background. 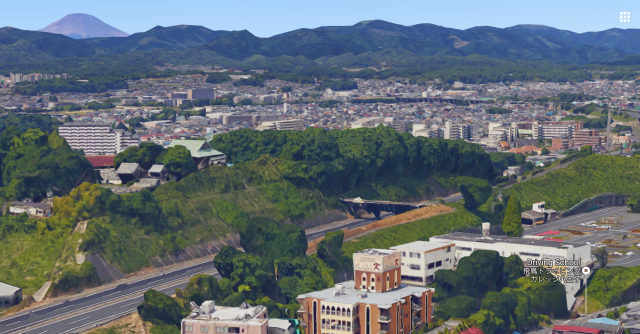 Leave a reply. I'd love to hear your thoughts. Cancel reply